Get To Know The Different Types Of Bail 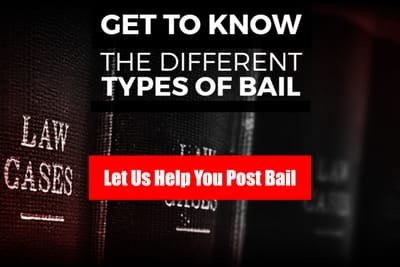 Understanding The Various Types Of Bail

The term "bail" is an umbrella term used to describe a variety of types. In general, a bail hearing is set to determine what the set number is for an accused bail and this varies based on their charges/finances. The accused is expected to show up to their hearing, listen to the judge, and follow through with established amount. Here's a detailed assessment of each type.

Once the amount is determined, a "cash bond" is required, which is to be paid via credit card, cash, and/or a personalized payment plan. Cash bonds are generally reserved for high-risk individuals, especially if they are a risk to the public. If the accused doesn't show up for future hearings, he/she loses 100% of the bail money and has to face the consequences of fleeing. If the accused does adhere to the law and attends his/her hearings, the bail money is returned in full after proceedings.

A person's assets are used as a form of payment with this type of bond. In general, these assets may include cars, properties, and/or any other prized possessions of value. The judge may also rule for a lien on the property. If the accused doesn't appear to court hearings, those items are forfeited to the court as a way to cover costs. This is a rare bail option and is used as a final option.

After weighing the different variables, a judge may deem it necessary to use personal recognizance. In this case, the accused will not have to pay a set bail amount and can still leave as long as they show up for future hearings. If the accused doesn't attend his/her hearings, they're subjected to immediate custody and the legal consequences attached to such an outcome. This is only used if the accused is deemed to be a low-risk individual.

If an officer uses a "cite out," the accused is able to move forward with the bail legally. However, if the accused does not attend future court hearings, he/she will face the legal consequences associated with their decision (i.e. imprisonment). A release on citation is generally used for smaller cases where the violation is minor.

This type of bail is also called a "bail bond." For bail bonds, the accused is deemed unable to pay the set amount as determined by the judge. As a result, the accused is able to speak to an external party (bail bondsman) to assist with the payment as collateral. If the individual doesn't show up for court hearings, the bail bonds agency can lay additional charges and/or gain access to the accused assets. Along with possession of prized assets, the accused also has to deal with pre-determined legal consequences for not attending court hearings in a timely manner.

For those looking to find a well-established and respected local bail bond agent click this link, it's time to look for a trusted Bail Bonds service. They have been serving Arizona for generations and have a wonderful understanding of the legal system. Their bail bondsman will ensure everything is done to help you move forward with the bail. They take pride in delivering exceptional value and ensuring you can rest easy as soon as possible. All of your question about bail bonds service will be answered when you follow the link.

To learn more about hiring a trusted bail bondsman https://www.abc15.com/lifestyle/sonoran-living/sl-sponsors/didnt-do-it-bail-bonds-can-talks-tips-on-hiring-a-bail-bondsman , click the link and get started right away!
I BUILT MY SITE FOR FREE USING